Feminism is for everybody! 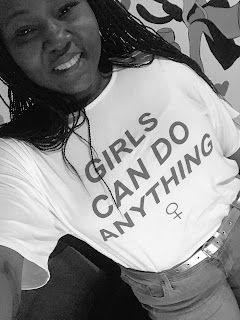 I have interacted with many women who don’t identify as feminist. Then I go on with the conversation and realize they are actually feminists. I don’t blame their choice not to identify with feminism because the word often depicts bitter, man-hating, and lonely unbelievers. I had to add unbelievers because many Christian women think feminism is not their concern and christian men think its a sin because God said the man is the head of the home, the keyword being home not the world. You can be the president and still submit to your husband, feminism is not saying you should not. In fact, submission comes from a place of inner strength and power. A person that isn’t strong can’t submit, simple!

First, let’s see some definitions of feminism:
The issue of who cooks or cleans in the home is a big insult to feminism in my opinion. Why do we get so focused on marriage gender roles when there are females all over the world being subjected to slavery, child marriage, and many harsh situations simply because they were born female. For example, look at the story of the "money wives" in Obanliku, Cross River state, Nigeria. This is where feminism is needed, our sisters are suffering. ***Edit, I believe cooking and cleaning is also part of feminism. Women are exhausted and dying of high blood pressure because all the domestic work is not them while some even work a full-time job. It matters!***

Let me clear the air, equality is not sameness. We can and will never be the same! We were created specifically for the things we both can do respectively. So where did we ever get the notion that feminism is fighting for sameness? Men can also be feminists; the men around you are probably feminists. They respect you as a person, they believe you have a right to an education, a right to safety, a right to unapologetic-ally do exploits without societal placed restrictions. So yeah, many men are feminists.

There are many things feminism has, can and will achieve. Distancing ourselves from the movement only gives room for people that want to hijack it with their anti-men and hateful campaign. These people are really misandrist. A misandrist is a person who despises or hates males. Many people who may identify as feminists are actually a misandrist. One of their agenda is to do everything in their power to subjugate and demean men until their goals are achieved. This is a very hateful agenda that we shouldn't be associated with. But I stand, feminism is for EVERYBODY!

Let’s reflect for a minute, how can we destroy the patriarchy (a system of society or government in which men hold the power and women are largely excluded from it) if the major people that benefit from it (men) are constantly harassed and hated by the “feminist” who wants to effect real change? The time for male bashing should never have existed, the time for including men in the discussion to end the societal, economic and political oppression of women is NOW!

I urge you, don’t distance yourself from the word “feminist”, it is a word of power and strength that tells you where women are coming from (being tagged as property) and where we envision to be (CEO’s, world leaders, innovators).

Let me restate this, MEN AND WOMEN CAN NEVER BE THE SAME! Feminism calls for equal rights and equal opportunities for the advancement of both genders. An example I saw was by Kathy Caprino captures the concept of equality not sameness perfectly:

"If there were two young boys in a classroom, and one was physically weaker and smaller than the other, would we believe it’s right to keep the weaker, smaller boy from having the same access – to the teacher, to learning, to the computers, to the books and class resources, to other children in the class -- because he didn’t have the same physical strength as the other boy."

This illustration shows the situation of males and females, I hope it paints a clear picture of what feminism is working to achieve. The presence of the weaker boy in the class has not replaced the stronger boy. It gives them equal access to everything they need to be successful in life. Many girls don’t have access to education because of their gender, many women are seen as objects because of historical oppression, this is why sexual assault and harassment occurs without fear or hesitation from horrible men.

Women, teach your male friends, your sons, your spouses to fight for equality, it doesn’t remove anything from them. Only weak men will push against true feminism!

Men, learn to be a feminist! Speak against injustice. Injustice anywhere is a threat to justice everywhere.

Let’s unite and change the view of feminism; if we keep running away from it will continue to be viewed in a negative light and hijacked by misandrists. Feminism is not about:
Just in case you are still sceptical about feminism, many of its benefits are what we currently enjoy. There is more to be achieved:

We can do this! Everyone unite to ensure women are no longer excluded from opportunities simply because of their gender. One day at a time, we can change the negative view of feminism so real change can be affected.