Men are Scum: The godly man guide to not being a scum 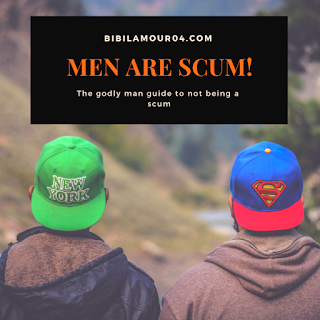 Last week, I watched Larry Charles' dangerous world of comedy on Netflix and the third episode focused on sexism.  It turns out that Nigeria's comedy industry thrives on sexists jokes that objectify women, normalise rape and encourage the exploitation of women. It was one of the most disgusting things I have ever watched. It's interesting that many think rape is a thing to joke about and the audience laughs at those vile jokes that involve victim blaming. Sexism is broadly seen in our society from the blue collar workers to the board room bosses, from Nollywood movies to product commercials. It is so deeply embedded in our subconscious that we don’t intend to hurt women with our words or actions, it is just a thing of a "normal thing".
The truth is I am not trying to vilify anyone. The average man was dealt sexism as a part of being in this present day society. The good thing is you can unlearn all of these things. The Holy Spirit is your teacher, he can help you remove all these sexist thoughts and opinion towards women and help you see them are real-life full human beings that deserve to thrive in our society.

I have also realised that unlearning these sexist traits is not easy and many men are clueless as to what is sexist or not. So in the spirit of celebrating the International Women’s Month, here are so sexist things that you can choose to learn and unlearn:
Romans 12:12 (ESV) Rejoice in hope, be patient in tribulation, be constant in prayer.

Isaiah 1:17a Amplified Bible, Classic Edition (AMPC) Learn to do right! Seek justice, relieve the oppressed, and correct the oppressor.


1 Corinthians 12: 26 (TLB) If one part suffers, all parts suffer with it, and if one part is honored, all the parts are glad.


Proverbs 18:2 (AMPC) A [self-confident] fool has no delight in understanding but only in revealing his personal opinions and himself.


Psalm 20:4 ESV May he grant you your heart's desire and fulfill all your plans!


Matthew 5:8 (NLT)"God blesses those whose hearts are pure, for they will see God.”
Ephesians 4:29 NIV Do not let any unwholesome talk come out of your mouths, but only what is helpful for building others up according to their needs, that it may benefit those who listen

Explaining a woman’s body to a woman: This one needs no explanation. who are you to talk about things you have no first-hand experience with to people that experience it daily?

Explaining a woman’s field to her even though you are not in that field: I have seen a guy explaining space matter to a director in a NASA program simply because she is a girl and he figured she knows nothing about the issue. Don't assume.

Telling a woman to smile: You may think this is not bizarre but do you go around telling men to smile?

Assuming a woman knows nothing about “male-dominated things”: I may not know a lot about changing the oil in my car but I have female friends that can repair a generator. Don’t assume!

Telling a woman what she likes or doesn’t like because of her gender: I have heard men that say women don’t like driving. Driving is very liberating as mundane as it may sound. Don't assume!

Telling women how to or how not to react in certain situations: Remember the guy that decided it was a good idea to tweet that women should stop complaining about their period cramps on social media.

Proverbs 14:6 (AMPC) A scoffer seeks Wisdom in vain [for his very attitude blinds and deafens him to it], but knowledge is easy to him who [being teachable] understands

MOST IMPORTANT OF ALL!


Sexual assault is NEVER the victim’s fault. Sexual assault is a violent attack on an individual, not a spontaneous crime of sexual passion. For a victim, it is a humiliating and degrading act. No one “asks” for or deserves this type of attack.

Anytime someone is forced to have sex against their will, they have been sexually assaulted, regardless of whether or not they fought back or said "no". There are many reasons why a victim might not physically fight their attacker including shock, fear, threats or the size and strength of the attacker.

Sexual assault is motivated by hostility, power and control. Sexual assaults are not motivated by sexual desire. Unlike animals, humans are capable of controlling how they choose to act on or express sexual urges.

Proverbs 3:31 NIV Do not envy the violent or choose any of their ways.

Thank you so much for reading until the very end. it shows that you are very interested in the wellbeing of women around the world. I pray that God blesses you and helps you to unlearn things that are not of him.

Ladies, please feel free to add additional things that you think I missed in the comment session. Men, feel free to post whatever you feel like saying about this matter. I appreciate you so much for clicking this link.

There will never be a new world order until women are a part of it.-Alice Paul