What is the true goal of satan? 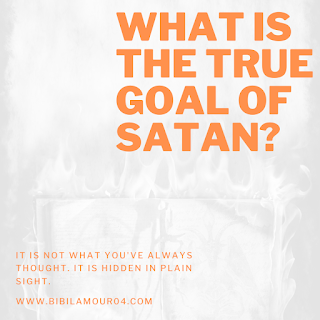 What is the true goal of satan?

Satan isn't fighting many things as we think. His main fight is against the word of God! Now, I haven't said he doesn't deal in oppression and afflictions. Of course, he does!

Acts 10:38(NIV)how God anointed Jesus of Nazareth with the Holy Spirit and power, and how he went around doing good and healing all who were under the power of the devil, because God was with him.

The verse above shows that he is found in sicknesses and diseases. Why does he do this also? To cut short people's lives so they don't encounter the gospel! A believer who is always sick also cannot be as effective in the ministry. All the trials and afflictions in the world are designed to weaken convictions and effectiveness!
However, we miss it when we feel the devil is out there to make sure people are poor alone. Yes, he can be found in lack and scarcity but he's not totally against people becoming rich as much as he's against people getting saved and growing in Christ! And this is why there are rich men who are already blinded by their trust in wealth. Remember what Christ said about the young rich ruler? ''It is hard for those who trust in riches to enter the kingdom of God."

Some folks think the devil doesn't want them to have the loudest wedding trending on ovation, Bella Naija etc. Well, he'd rather have you have that cheaply as long as you're deceived that's the ultimate! He's not really out to make people lose their jobs. He'd rather have people so busy with their jobs and successful as long as it hinders them from being saved and growing in the knowledge of God. The problem of this nation is more human than devilish. Neither poverty nor riches prevents his reign. In Europe, the reason why many have become atheists is because of a better system working and people do not see a need for God anymore. In Nigeria, poverty and lack still drive people to church. The devil would rather have the prosperity of America that produces atheists than have an economy that encourages seeking God. Because sometimes, people eventually get saved if they go to the right places. One of the amusing things in history is how nations dominated by unbelievers thrived well economically. From bible days!

In the temptation of Christ, he offered him all the kingdoms of the earth (Luke 4:6). See, as a believer, you might be given very juicy opportunities that would make you abandon your commitment to the word and then the work of ministry. You begin to entertain the thought that God is everywhere and you don't need church meetings since your work is now every day of the week and you no longer study and pray and share the gospel as you should, but you still feel good!

In the parable of the sower, Jesus made reference to something called the 'deceitfulness of riches.' See this...

Mark 4:18; "Now these are the ones sown among thorns; they are the ones who hear the word, and the CARES OF THIS WORLD, THE DECEITFULNESS OF RICHES, AND THE DESIRE FOR OTHER THINGS entering in CHOKE THE WORD, and it becomes unfruitful.

Mark those words in capitals. Cares of this world, the deceitfulness of riches and desire for other things choke the word and lead to unfruitfulness.

Quit that mindset that says the main thing the devil is fighting is you not being successful! Satan is not against you hustling to be rich. He loves your hustle! As long as your hustle is choking spiritual commitments to the word and prayers and sharing the gospel to others. He'd rather have you hustle so much and become too successful to be committed as a believer! Even the poor man is caught in this web of chasing riches like it's the ultimate. His lack and poverty have become his distraction.

Also, notice that in the parable of the sower the only thing being fought is the Word! The first set of people had satan come to take the word that was sown at verse 15. The second set of people had tribulation and persecution arise FOR THE WORD'S SAKE (verse 17). The third set of people are the ones we saw in verse 18. It was all an onslaught against the word!

This is because your wedding, business, success, riches and all do not affect his reign and rule on the earth! The only thing that shakes and unsettles his kingdom is the Gospel which is the power of God! So your wealth, success, marriage etc are no threats unless they are for the support of the gospel! The main thing he's fighting in the life of the believer right now is the word!

Why? See this simple equation - In 2 Corinthians 4:3-4, he's described as one who veils men from seeing the glorious gospel of Christ. Their minds are blinded by him, the god of this age. This is his singular ambition. He's busy at it daily!

The Believer, on the other hand, has been sent to preach this same gospel that is the power of God unto salvation! You are the one who has the power to remove the veils he's put on people's minds. So, what do you think he's targeting in your life? That same gospel! He'd bring lots of distractions your way to make sure you have no time for it.

If he's fighting the influence of the gospel, his main fight is against those who have this influence. To make us so pre-occupied with life and other things.

”There are dozens of references to God in the Scriptures for everyone to the figure of Satan. This reflects a sometimes forgotten theological truth that the devil is by no means God's counterpart. He is a creature, not the Creator.” - John Ortberg

I’m Adebowale Ibukun Tosin, a Pastor at TSK Church, Lagos. I’m passionate about raising sound believers, equipping them to fulfil their ministry, with an emphasis on the word and prayers as vital ingredients.

You can connect with Pastor Tosin on Facebook, here.