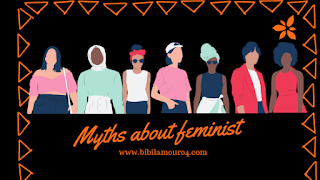 Hello everyone, thank you so much for clicking on my link. You are awesome and God bless you richly. Please if you have not subscribed to my blog, click on the big subscribe button above and enter your email address. This is the last Thursday in the International Women’s Month and I had so much fun writing about women-focused content. I hope we all had a chance to unlearn and relearn stuff that society has conditioned us into believing. Remember, #BalanceForBetter is the watch action word for every space.

I chose to write about feminists related myths this week because I observed that many have uninformed pre-conceived notions about feminists and I wanted to clear the air about these popular notions as seen on Nigerian Twitter. Let me know your thoughts, leave a comment below.

Feminist: a person who supports feminism.

Feminism: the advocacy of women's rights on the basis of the equality of the sexes.

·    Feminists are angry, lonely and bitter: This is the most common description used for women who are unapologetic about their commitment to equality of the sexes. It is not cool to make assumptions about people because of their passion. Thankfully, many women wear this title as a badge of honour. I’d like to break this one down into bits:

o   Lonely: Firstly, feminists do get married if they desire. Secondly, it is not compulsory for everyone to get married feminist included. Many of the awesome feminists I know are happily married, do you know why? They know exactly what they want and they go for it. If you are a basic man, no feminist will come near you be rest assured. Feminists partner up with people that see them as fully grown and complete women. People that value them as a human being. They don’t need a man to validate their existence on earth or to complete them. They are a full package on their own. Many men were not raised to see women as independent entities, they often view women as damsels in distress waiting to be rescued. Rather than waiting to get married, feminists are getting busy making moves that will elevate them and pave the way for the women coming behind them. Many feminists have a circle of friends that are like minded which means they are never lonely. So trust me, feminists are not lonely.
o   Bitter: The society is not ready for a generation of women that throw away likeability for telling their truth. This means they tell you exactly as it is without fear of you liking them or not. This does not mean they are unpleasant, dishonest, uncouth or disrespectful. Because a feminist said something that hurt you does not mean they are bitter; let that hurt help you look inwardly to see why it hurts. Feminist have an agenda (equality for women in all spaces), some have to be straight forward about it and that’s okay. So pick another word before you attempt to call a feminist bitter.

Proverbs 18:2 (ESV)A fool takes no pleasure in understanding, but only in expressing his opinion.

·      Feminists hates men and wish them dead: This is a stretch! I don’t know why men often think feminists are out to eradicate the world of male humans. Do some feminist hate men? Absolutely, yes! But you see, women hating men has no real impact in the general outlook on things. Women hating men only brings about bruised egos and emotional ouches. But flip the script, men hating women is very horrifying! It's beyond emotional ouches and it moves to the worse things in life (Murder, rape, kidnapping, acid baths etc of women). For a large chunk of feminist, no one is wishing you dead (except you are a rapist or a murderer then the thought crosses the mind). All we want is fundamental human rights! I don’t endorse hatred for men. Did you know feminism actually benefits the men too? Feminism wants to break down sexism and gender roles that the patriarchy perpetuates like “men don’t cry”, “men must be 100% responsible for the finances of the family”, “Men must be strong all the time”, “Men must always pay for dates” etc. Are you men not tired of all these societal pressures that are put on you men? If women really hated men, I believe it would have led to eradicating men but see men are still around. Check out my post on Feminism is for everybody. Men really have to use their position in society to ally with the feminist movement genuinely.

Galatians 5:13 (ESV) For you were called to freedom, brothers. Only do not use your freedom as an opportunity for the flesh, but through love serve one another.

·       Feminists have daddy issues: The other day, someone was trying to pick my brain to understand why I was a feminist. He could not reconcile how I could be a lover of Jesus and support the equality of the sexes. He started to ask me questions like “what is the relationship with your father like?”. I told him I'm 100 per cent a daddy’s girl and my daddy (A pastor) raised his 6 daughters to be amazing and not allow themselves to be despised because of their gender. The guy picking my brain reasoning was “Feminists are women that have had a tough time with men growing up” LOL. I told him, I don’t fit into that box you have created for feminists. So no, many feminists don’t have a bad relationship with their dad. I have read inspiring stories that feminist wrote about that dads inspiring them to believe in the social, economic and political equality of the sexes.

·      Feminists can’t be a Christian: This is what I get from many people. First of all, we are spirit beings. God, Jesus and Holy Spirit are not sexist because they relate with us based on our spirit man which is our real self. We are tripartite being (A spirit that lives in a body and has a soul). This body is nothing but my legal passport to exist in this natural realm and I should have the right to thrive in this realm without any man-made restrictions. In Christ, we are all equal and I plan to advocate for equality in this natural realm.

Galatians 3:28-29 (MSG) 28-29 In Christ’s family there can be no division into Jew and non-Jew, slave and free, male and female. Among us you are all equal. That is, we are all in a common relationship with Jesus Christ. Also, since you are Christ’s family, then you are Abraham’s famous “descendant,” heirs according to the covenant promises.

For women that do not want to identify as a feminist for one reason on another, that’s okay. I implore you to do your research on what feminism really means. I know the common reasons they give is:

As bad as some of our pre-conceived notions may seem, feminism is not a bad thing. Feminists should not be vilified or tagged as something they are not simply because you can't relate to or understand their struggle. Ask questions if you don't understand what is being said. Avoid being defensive and be open to unlearning and relearning. Lastly, do your own research! Its emotionally draining to explain why feminism is important to many women, search online and you will see why.

Till next time, bye.